Kenny Akers: A Profile in Courage 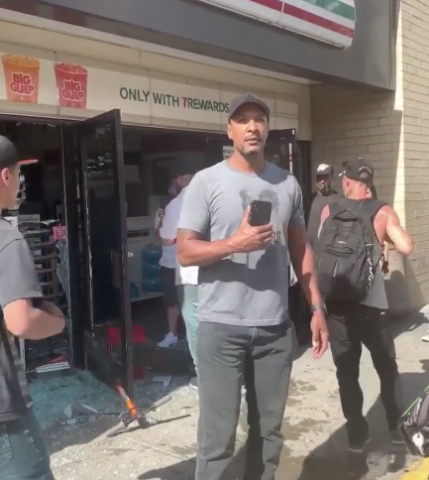 On the morning of May 30th, hundreds of people came together in Salt Lake City to mourn the death of George Floyd and show their solidarity with the Black community. The protest was largely peaceful until a small group decided to lash out. Two cars were burned, and several stores in the downtown area were vandalized or looted. Tensions were definitely rising throughout the community.

That’s where Kenny Akers came in. You might have seen the video already, which has been seen over 100,000 times on YouTube alone. A downtown convenience store was surrounded by a throng of people, some trying to get out, and others milling about the entrance, broken glass from the front windows littering the ground around the store.

Kenny was walking with a friend when they come across the scene at the store. He didn’t hesitate. In seconds, he was at the front of the crowd, yelling to get everyone’s attention.

“Violence is not the answer!”

It was like a shockwave hit the crowd. What were mere moments before a scene of pandemonium slowly started to revert to something resembling calm. There was still broken glass everywhere, and nerves were definitely on edge, but this momentary flare-up had been averted by a lone man with a powerful voice.

Talk about a super-power.

We all have notions of what we would do in a situation like that. Would we run away? Would we freeze in place, or perhaps try and find help? Or, would you put yourself right in front of the problem and try your hardest to calm things down?

Kenny Akers has been in plenty of dangerous situations throughout his life. He worked as a military police officer during part of his service in the Navy, where he traveled to over 52 countries. Certainly, not every one of those countries was an ideal place to be as an American citizen. During that time, he probably had more than his fair share of keeping things calm in places where sailors couldn’t afford to find trouble.

But what is it that makes a person spring into action like Kenny did? This wasn’t a case of someone keeping the peace because it was his job. This situation is very much one person deciding that he was going to do the right thing. Mr. Aker’s message resonates because it packs a power of its own.

Hours before the incident at that convenience store, hundreds of protesters gathered together to show their love and support for the Black community and voice their demands for change.

What Mr. Aker did that day was certainly heroic– He selflessly put himself in between a crowd with ill intent to put a stop to more damage being inflicted on an innocent store owner’s business.

He also risked his life in another way. Kenny Akers is a person of color.

As we have seen all across this country, race can change perception in a heartbeat.

People of color in the United States know that getting in front of a dangerous situation is even more perilous for them. People make assumptions based on race all the time in this country– Kenny Akers standing in front of a crowd at a vandalized store put him in immediate danger in more ways than one.

Still, he didn’t hesitate. Kenny literally stared an angry, aggressive crowd down and brought a glimmer of peace where there had been chaos only minutes before. He had, in that moment, everything to lose. He has to know that that situation could have gotten ugly. He has to know that his wife, his kids, his grandchildren all might have had to grapple with more tragedy and sorrow if anything went wrong.

It’s an example that was desperately needed.

We’ll have a chance to talk with Mr. Akers about this extraordinary moment of bravery on the next episode of the VINI Podcast. We’ll also talk with him about how we can all come together and address the issues of racial inequity and violence that are gripping this country right now and have been for centuries.

Leigh George Kade is an author, illustrator, and behavioral health enthusiast. His background includes work in behavior management, broadcast radio, and entertainment journalism, He currently works as a Certified Case Manager and Media Producer at Valley Behavioral Health, and lives in Salt Lake City with his incredibly smart wife and two ridiculous dogs."

A Profile in Courage" uk-cover>

Kenny Akers: A Profile in Courage

On the morning of May 30th, hundreds of people came together in Salt Lake Ci...